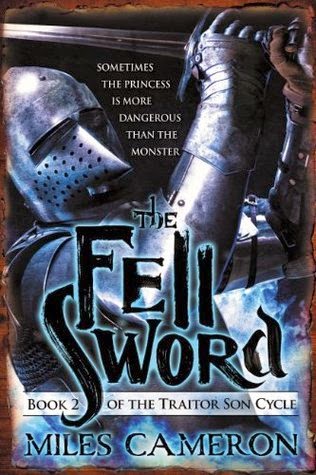 I thought that The Red Knight was a fantastic debut.   It gave us a rich unique fantasy world with complex characters and a story that was far from the “orphan farm boy is destined to greatness”.

The Fell Sword is the second book in the series (The Traitor Son Cycle, apparently).  It takes place just after the events of the earlier novel.  The Red Knight’s company has accepted a contract to the East, where the Emperor has been captured and the empire is in peril.  Or is it?  As they settle into this new land they discover that the situation is not as simple as it initially appeared.

The Fell Sword continues on with every character and storyline that were introduced in The Red Knight.  But don’t fear – a plethora of new characters, locations and details emerge.  Now this isn’t quite at George RR Martin levels of complexity and confusion, but with only two books under our belt, it’s certainly working on reaching those levels.  It’s not that the detail and scope are not warranted.  Clearly Cameron has a story to tell that is truly epic in scope.  The problem is that the pacing for this book is off.  It feels like the vast majority of this book is an introduction.  By the time that things seemed to start paying off and the book felt truly underway, it was 80% over.

On the whole I was disappointed in this volume of the series.  The first volume worked so well, perhaps because it felt like a small tight story within a larger epic struggle.  This volume feels a bit too saggy, with subplots that feel disconnected from the main thrust of the novel.  That being said, I’m still committed to the series, and hope that volume three is a bit tighter.
Posted by Burgoo at 11:32 AM