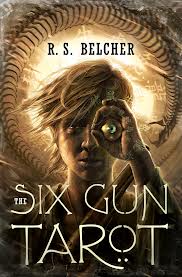 First, there’s the town itself.  Golgotha is a Nevada town after the silver mine tapped out.  It’s not a ghost town yet, but there’s a sense that the town is in decline, and may be there eventually.  And Golgotha seems to have lots of secrets.  We never really learn about most of them, but hints are there – a grave that must be salted, strange murders that have happened.  At one point a character asks if the trouble is regular trouble, or “Golgotha trouble”.

Of course a town is nothing without its citizens, and the people of Golgotha aren’t the inhabitants of “Gunsmoke”.  There’s a mad scientist, a sheriff who can’t die, a feminist assassin, a Chinese sorcerer, and other unique characters.  The implication is that Golgotha itself has some sort of mystical gravity, pulling people and monsters to it.
The Six Gun Tarot is an ambitious first novel.  Given the large cast, and even larger set of ideas, in play, Belcher has a lot of balls to keep in the air.  And somehow he manages to pull it off.  The first half or so of the book is primarily setup:  introducing the characters and concepts that will be needed.  In the middle of the book, the tone takes a dramatic shift, & suddenly it’s a frantic horror story, with our cast of characters fighting for survival.  But it all works.  The characters are nicely developed and have distinct voices.

The world building, despite its ambitions, is nicely handled and gives a sense of solidity to this world.  Belcher wisely chooses to leave the reader with some mysteries.  I found myself wanting to know more about the backstories of several of the characters, and wondered if my suspicions were correct about them.

A book like this isn’t for everyone.  It’s not boilerplate fantasy or SF, with their familiar tropes.  But if you’re looking for something a bit off the beaten path, or from a new voice, then The Six Gun Tarot could be very rewarding.
Posted by Burgoo at 12:31 PM