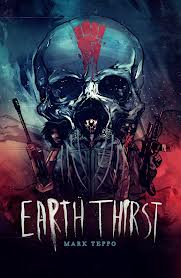 Vampires as ecowarriors?  Sounds intriguing… So how does that play out?

The plot is full of thriller tropes.  A superspy is on a mission that goes cockeyed.  Afterward, he’s on the run while trying to put together all the pieces to figure out what exactly is going on.  He teams up with the sexy noncombatant, who helps him (while providing a romantic interest).  Wouldn’t you know it, he realizes that there are two shadowy groups in opposition to his own organization.   After much exotic globetrotting, he has a final showdown, only to realize that the truth still hasn’t been uncovered.

In Earth Thirst, the superspy is named Silas, & he’s a Greek soldier who is a vampire (here they are referred to as Arcadians).  He’s been around since the Trojan War, & somehow due to the rejuvenation process the Arcadians use, he’s missing a lot of his memory (not quite as much as Jason Bourne, but you get the idea).  The sexy noncombatant is a journalist named Mere, who of course has investigative skills necessary to put the pieces of the conspiracy together.

So what about that vampire thing?  Teppo’s vampires don’t do a lot of vampirey stuff. There’s a bit of blood drinking, but it’s more like a guy who enjoys a beer now & then, rather than the alcoholism of most vampires.  They can regenerate by being buried in “good soil”.  But most of the time it’s just used to give certain characters greater than human abilities (speed, strength, etc).

Oddly enough, the parts of Earth Thirst that work best are the thriller elements.  Sure, most of it is bog standard for a post Bourne thriller, but it was very well done.  Faced paced, great action sequences.  It was compelling and riveting.

What didn’t work as well for me were the vampire elements.  The Arcadians themselves seemed a bit overpowered.  They can walk in sun, go without drinking blood, have access to untold wealth and top notch military training.  Silas should have been sympathetic, but I had some difficulty becoming emotionally invested in a character whose greatest flaw is a bad memory. (And that seemed to be a convenient reason to withhold information from the reader – what have the Arcadians been doing for thousands of years?  Why should we think of them sympathetically?)

Would I recommend Earth Thirst?  Yes, with reservations.  It’s a lot of fun, but not as innovative as the blurb may make you think.
Posted by Burgoo at 12:46 PM