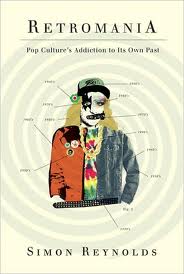 There's no doubt that this is the best book on music criticism released in 2011.  It has generated a flurry of internet discussion, & the discussion now seems to be spilling over from the world of music to more widespread cultural critique.

In a nutshell, Reynolds argues that popular music has become addicted to rehashing its own history.  This is preventing development of any really new movements.  In the process, he takes us back to the 60s & works his way forwards chronicling various retro fads & movements.

It's not often that I find music criticism to be so intellectually provocative.  Of course, most music criticism doesn't touch on concepts like "radical atemporality" or "hauntology".  There's a lot here to process, & I feel like I'm still chewing on these ideas, months after finishing the book.