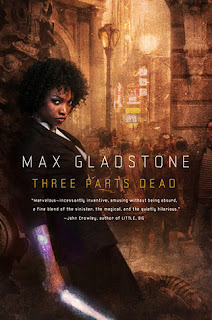 I’ve been hearing about Gladstone for a few years now, & I finally got around to checking out his debut, Three Parts Dead. All I really knew was that it was about magical lawyers, which didn’t exactly fill me with excitement.

Our protagonist, Tara, is a new hire at a big necromantic lawyer firm.  She’s brought in on a case where a god has died.  Apparently lawyers go through the contracts & obligations of gods to determine what happens to any lingering power.  As you might expect, the death of a god is not a simple matter, with multiple factions & deceptions.

Gladstone is impressive in this debut.  The world building is unique and detailed.  The reader is dropped into the world & has to sink or swim – some people hate this kind of world building.  It’s my preference, so I don’t mind the lack of clear rules and demarcations.  He keeps the plot churning, and I found it quite a compulsive read by the end.

There are just a couple of nagging concerns that I have.  We’re presented with the Craft as being Tara’s occupation of choice.  While it’s never really developed, the Craft & Craftsmen themselves seem to be forces of evil.  Is this developed in future books?  I’d like more of a look at this.  Similarly, this entire world is built on capitalism.  Worshipers generate some sort of energy that feeds the gods.  The gods themselves pass on this energy to their worshipers and others who can purchase some of this god energy.  There is no mechanism for any sort of true solidarity.  Two are not stronger than one.  If feudal societies thought that they were imitating the ways of the heavens, then here capitalists are truly mimicking the ways of the gods.

Its interesting stuff, and I’d like to see it explored.  Overall though, I really enjoyed Three Parts Dead, & want to read more of this series.
Posted by Burgoo at 9:16 AM