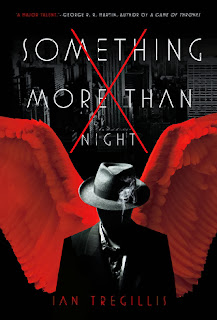 The Archangel Gabriel is murdered and comes plummeting from the sky.  A low level angel named Bayliss is hanging around on Earth, and realizes that Gabriel needs to be replaced pronto, or the resulting imbalance could destroy heaven and Earth.  So he turns a human woman, Molly, into an angel.  Now Molly has to get her head around two facts: first she’s dead, and second she’s an angel.  Bayliss and Molly work together to investigate Gabriel’s death.  Who knew that angels could be killed?  And why would someone kill one of them?

Bayliss’ portion of the narrative is patterned after a post-war detective novel.  It comes complete with a greasy diner, thugs who work for unknown powerful men, and a wisecracking detective.  Tregillis does an excellent job of not only using the tropes of these types of novels, but also captures the voice of those protagonists.

Any novel that deals with angels and heaven has to have a clear conception of how it all will be depicted. I suppose that the current vision of the angelic host is that of a rigid nofunnik.  They are loyal soldiers who have no sense of humor or flexibility.  Their heaven (usually not depicted) would be somewhat featureless and clean.  Think Danish modernism to its extreme.

Tregillis sidesteps this entirely.  His heaven is full of mathematic potential.  It is different from earth in its complexity.  It embodies potentials that do not exist on this simplified form of existence.  In practice it reminded me of the post-singularity of Doctorow and Stross, or Rajaniemi’s world for Jean le Flambeur.  Fundamentally it is composed of religious concepts described with the language of theoretical physics.  (How else would people without advanced theoretical mathematical concepts describe such a thing but through religious language?).  Yes, it can be somewhat confusing and mystifying.  To a certain extent, that is the point.  This is perhaps where Tregillis impresses me the most.  This is easily the most unique and inventive depiction of heaven and its host that I have ever read.  It is a science fictional description of a fantasy use of religious concepts.  Absolutely brilliant.

But as Bayliss might say, “yeah, that and a nickel will get you a cup of joe.”  True enough.  How does it read is perhaps the real test.  Fortunately, the reading is just as wonderful and the concepts.  All of the portions of this story hold up.  At its core it is, of course, a mystery.  Who killed Gabriel?  And like a classic detective novel, we get that investigation.  But along the way we also get so much more.